Mystique Theater had its beginning in 1990 when Terry Commons combined his performance of close up magic with a haunted mansion theme for a Halloween season presentation. It was extremely popular and was the catalyst for further development of the idea. 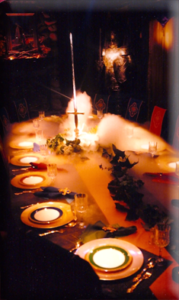 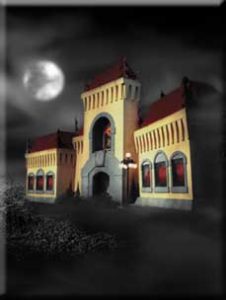 Our next facility, located at 158 E. Chubbuck Road, opened May 14, 2001 and expanded the original chamber concept to a more versatile space, seating up to 20 people. It provided an intense, interactive entertainment experience.

Sharing the Mystique building, was our Grand Hall Theater serving as the most elaborately decorated theater in the state. State-of-the-art sound and lighting allowed for professional and competitive theatrical endeavors. With theater style seating for 300 people or dinner seating for nearly 200, there was not a bad seat in the house. This facility was sold and the Mystique name removed in Jan 2016.

– Mystique Dining opened in Folsom, CA on December 14th 2016 in the historical district near the famed Folsom Prison. This facility seats 18 people and enjoys providing world-class entertainment to the greater Sacramento area.

The popularity of this location has lead to the development of a second location, which opened September 3rd, 2018 in West Jordan, UT at the popular shopping and entertainment destination, Gardner Village.

This second venue hosts up to 30 patrons per seating and brings a perpetual source of world-class magic artistry to the greater Salt Lake City area.